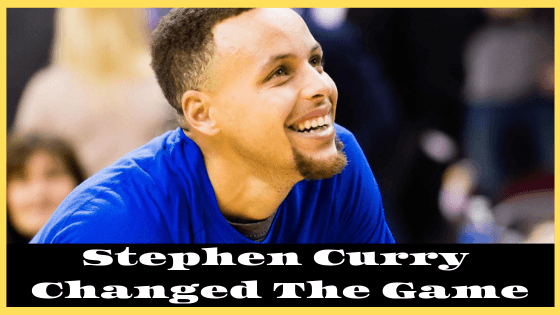 Curry Has Left His Mark All Over Basketball

The short answer….yes. Stephen Curry has changed basketball in ways that we never would have expected as the 6’3” guard was drafted from Davidson College. His wispy, small stature didn’t really jive with the league as most General Managers were looking for more Lebron James type players.

But something was seriously special about Curry. He commanded double and triple teams in college and still averaged 20+ points per game. His draft prospects skyrocketed as scouts saw the level of excitement and success he brought to the small college in Charlotte.

Stephen Curry hadn’t changed the game yet, though. That would take a few years of getting used to the pro game and overcoming a few injuries.

Now the two-time NBA MVP is showing the entire world how basketball can be done differently. 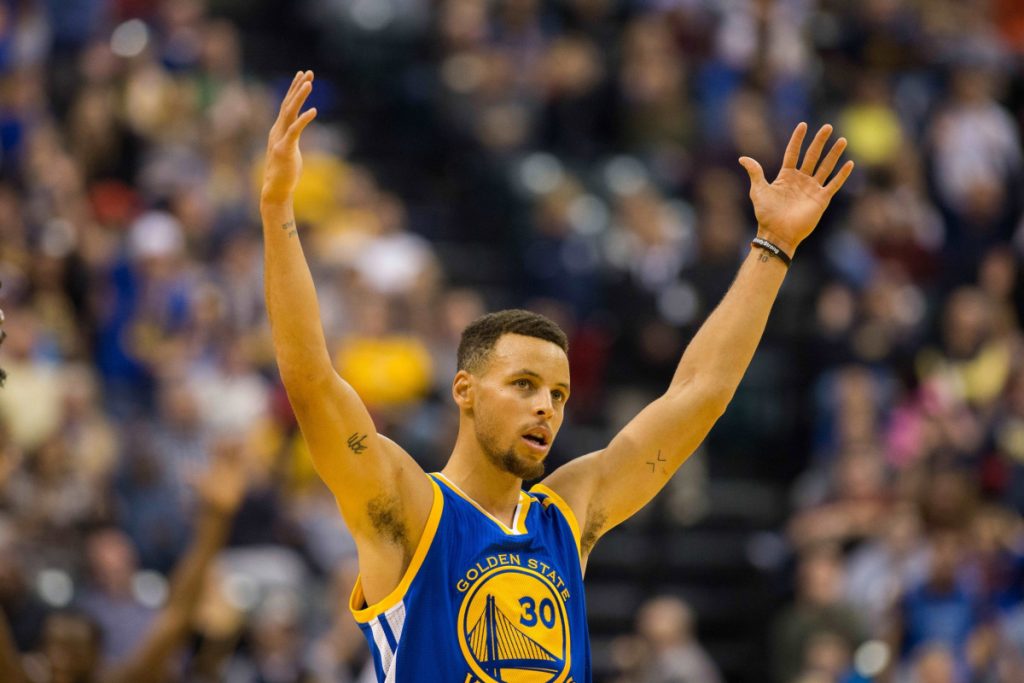 If you ask most folks who follow the game of basketball what Stephen Curry has done to change the game, the large majority of them will say he has changed the way three-pointers are shot.

In other words, he relies on the three-point shot more than any player before him. To their credit, they would be right. 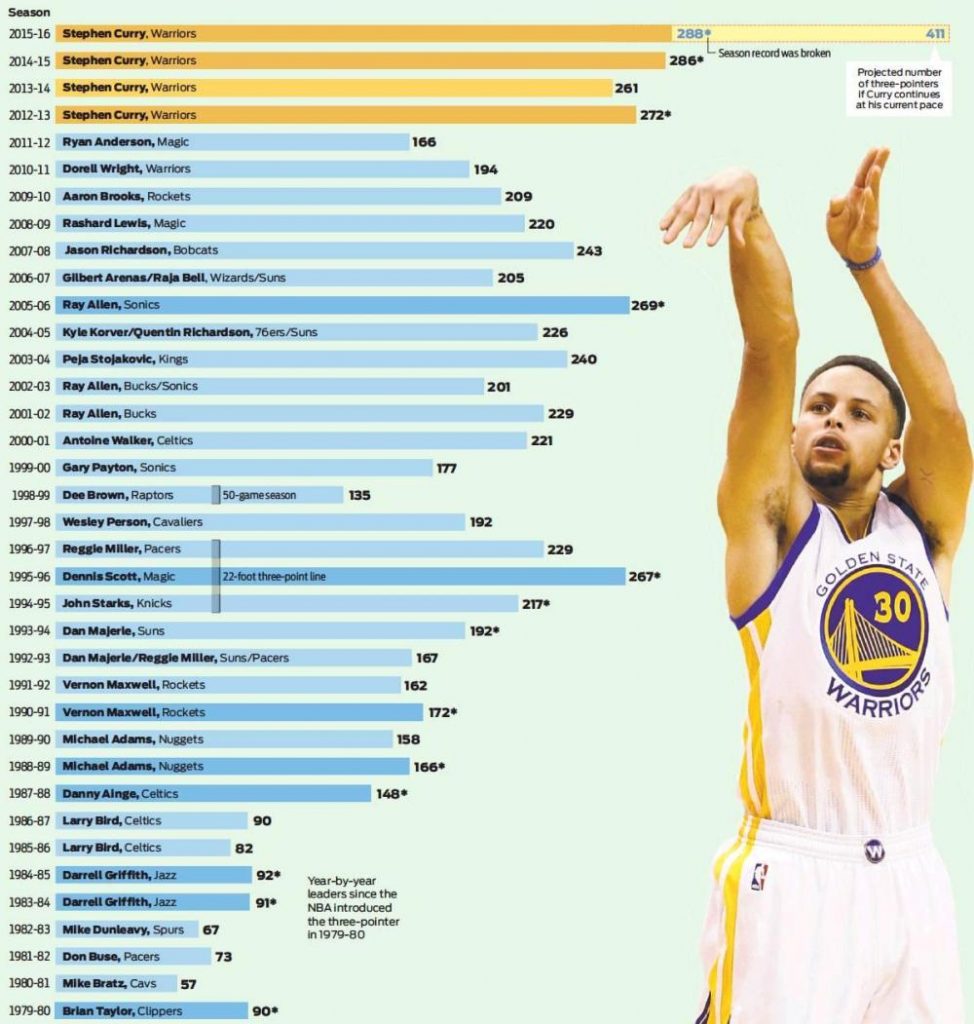 Curry continues to break his own three-point shot records, whether for a game or for a season.

But this isn’t where he has changed the game the most. Curry’s impact is being felt way deeper than just these statistics.

Stephen can completely stretch a defense to it’s breaking point. He makes shots from further away than most players have ever dared before, and this leads to bringing defenders as far away from the basket as possible.

This stretching of the defense leads to cutting lanes, and Curry’s own defender is on an island with elite offensive talent with great speed and handles.

In short, one way Curry has changed the game forever is spreading defenses thin.

While his outside shooting talent has led to a new offensive approach, it still doesn’t get to the very bottom of how Curry has changed the game permanently.

Let’s revisit Stephen’s size for a moment. At 6’3” and 180 lbs, Curry would be considered undersized for the NBA. The problem with this assessment is that he has an impact on the game way beyond his size would suggest.

Michael Jordan was 6’6” and 220 lbs and his impact on the game was immeasurable. He is the reason basketball is the second most popular sport in the world today. Jordan’s immense physical ability and size meant that he could do what players before him only dreamed of.

With powerful dunks and blazing speed, not to mention a great shooter, Michael Jordan became the standard bearer of what a basketball player should look like.

Jump to now with Stephen Curry, and we get a player that doesn’t fit that mold. Curry has never been known for dunking and very rarely will even attempt one. He has brought the game back to the little guy.

Curry inspires the everyman, and everywoman, to make impacts on the game in other ways than just physical dominance. Size will no longer be the top factor we use to judge talent.

While size is important, after Curry’s impact look at some of the #1 overall draft picks over the past years:

Prior to these draft years, centers were almost always the first pick, but the demand for centers has dropped dramatically.

The NBA game has changed to what skills you can bring to the table, and not just your height.

While Curry has inspired the smaller stature players around the world, he also brings a suite of Offensive threats almost never before seen. Stephen Curry can hurt your defense at least 4 different ways, and almost no player before him has been this dangerous.

With the ball in his hands, Curry can keep defenders on their heels, or on the floor with seriously damaged ankles. Because players have to respect that he will shoot from anywhere, they can fall victim to Curry blowing by them to the hoop.

This is one way he threatens your defense.

The next way is with the aforementioned three-point shot. He is always a threat to shoot, even as he crosses the half-court line. The fact that he has proven to hit a shot from anywhere, and with consistency, leads defenders to respect this shot and will stretch the defense out to accommodate that.

The third threat that Stephen wields, is the ability to make passes to keep the offense flowing smoothly. While other players with supreme offensive talent will use that talent as often as possible, Curry will never pass up the opportunity to get a teammate a shot. Averaging almost 7 assists a game for his career, to go along with almost 24 points, his passing ability makes double-teaming him impossible.

The final way Stephen Curry threatens defenses is his uncanny way of moving without the ball. Because defenses are afraid of his shot, they will assign a defender to him constantly, and this defender will be run ragged chasing Curry around screen after screen. Finally, Curry will find inches of space and make a shot anyway.

The Spot Up Shooter

The history of basketball has seen it’s fair share of three-point shooters. Players like, Ray Allen, Larry Bird, Reggie Miller, and Dell Curry all left a mark on the league by being able to shoot the three-point shot.

Why Stephen Curry differs from these players, even his father Dell Curry, is that Stephen can create his own shot better than all of them. He also shoots a much larger volume of threes than any of these players ever did.

The league didn’t value the three-point shot very much after its inception in 1979. Sure, plenty of players took threes, but the league was dominated by the mid-range jumper and the bruising play of post players.

The goal of the game was to get as close to the basket as possible before taking your shot. The coaching was right that these shots resulted in a higher percentage of makes. Most players who specialized in the three-point shot, sat in a corner waiting for a pass to arrive.

This “stretched” the defense a bit, because they would require a defender to run out on them to contest the shot.

Stephen Curry has changed all of that. He can create any shot he wants at almost any given time. He can shoot off of screens, off the dribble, after a pump fake, and even with a defender draped all over him.

Now players will look to shoot the three on their own versus the history of being an outlet for a driving player.

The Local Gym Has Changed

If you play basketball recreationally, you have seen the impact of Stephen Curry. Pick up games now are loaded with three-point shots, and I have personally seen players back up to the three-point line instead of using an open lane to the basket.

After 30 years of playing basketball, we are now in the era of the three-point shot, and Curry should get a large part of the credit.

When I was growing up, streetball was a game of proving yourself on the court, by showboating and your ability to get by a defender. These sensibilities are not in the pickup game any longer.

Today’s player wants to shoot first and ask questions later. Even at the detriment of the team.

While my generation dreamed of flying through the air like Michael Jordan, the new generation wants to hit 6 three-pointers a game like Stephen Curry.

While there isn’t anything inherently wrong with the three-point shot, we are not Curry, and it takes a superior level of skill to hit three-pointers with any consistency.

But the amateurs will continue to try.

Most people would agree that Stephen Curry is the second most popular player on the planet behind Lebron James. When Curry was 7th overall in the NBA draft to the Golden State Warriors, almost no one saw the meteoric rise to stardom that he has accomplished.

His skills have dazzled us and changed the game forever. But more than his changes to the game, he has brought championships to Golden State.

No matter how skilled a player is, the proof is in the winning and Curry has won, a lot. With winning comes even more attention and the spotlight grows brighter. After his first NBA championship, Stephen went on to win 2 NBA MVP awards.

As the pressure to do well mounted, Stephen became even better. This has impacted basketball in very real ways that we are all seeing to this day.

You Can Be Stephen

We haven’t been able to measure just how far Curry’s impact on the game will go. We may have to wait until his career is over and look back.

While Wilt Chamberlain made it en vogue for centers to dominate, and Michael Jordan made shooting guards great, Stephen Curry has made the little guy the most important one on the court.

This means that we can all strive to be Curry. We don’t have to be 6’8” with an outrageous wingspan to be successful in the sport.

Check out our article on what Life in the NBA is like to see how Curry lives throughout the year.

But not only successful, but Curry has also become one of the greatest to ever play the game. I hope Curry inspires you to play basketball, no matter your size, strength, or even age. You can be great at the game too.

Stephen Curry has changed basketball forever, and frankly, that is a good thing.