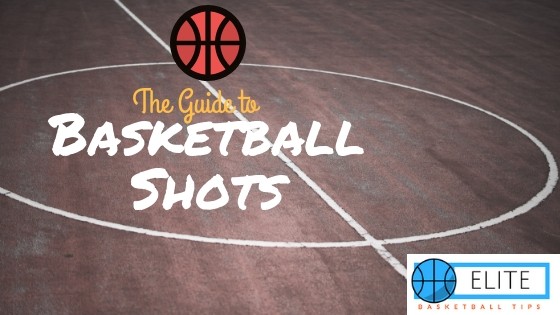 The Basics of Basketball: Shot Types

Basketball is a sport of many different ways of putting the ball into the basket. The object of the game is to score more points than the opposing team by shooting a ball through a hoop. 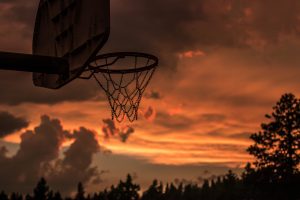 The layup is the easiest shot in basketball. This shot occurs very close to the basket, usually within 3 feet of the rim. Layups are also the most common drill done by teams during practice and before games. There are even many different forms of layups like finger rolls, scoop layups, or “glassing”. “Glassing” is the process of slapping or hitting the backboard while performing a layup.

The jump shot is a shot performed by leaving the floor to shoot the basketball. This shot can be done by moving to a spot and then ascending into a shot or can be accomplished standing still. The jump shot is the most common basketball shot and can be used anywhere on the court.

A set shot is performed by keeping your feet on the ground, bending your knees, and shooting the basketball. The most common time this shot is used is during a free throw. Set shots can be used anywhere on the court, but longer distances usually require a jump shot.

A bank shot is not a form of shot you do with your body, it is a shot that ricochets off of the backboard before going in. This shot is usually performed at angles to the basket where the backboard is the best location for the ball to go in. The square behind the rim on the backboard is usually used as a target for this shot.

The hook shot is usually performed by post players by using one hand to “hook” the ball above their head and into the basket. Popularized and perfected by Kareem Abdul-Jabbar, this shot has fallen out of popularity in modern times but has never lost its effectiveness in scoring. 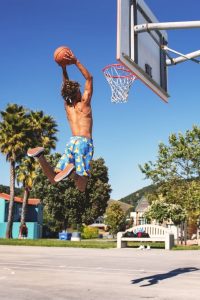 The dunk or slam dunk is a shot that is made at the rim itself. The player jumps up to the rim and throws or slams the ball through the hoop. This shot started to become popular in the 1970s and helped to make the game of basketball more popular in general. The dunk shows off the athleticism of the players and can be spectacular to watch.

The floater, or runner, is a shot performed by running towards the basket, jumping, and releasing a high arcing shot that falls into the basket. The purpose of this shot is to get the ball over larger defenders who may be lurking in the paint. Usually, smaller players will use this shot to avoid getting too close to the rim where shot blockers lurk.

The 3 pointer is not a body position or form of shot. It is a shot that is a specified distance from the rim depending on which level of basketball is being played. There is an arc drawn on the court that shows players where this shot can be attempted. The different distances from the basket are:

This shot has been trivialized and made fun of in recent years. The shot was popularized by Rick Barry as a two-handed, underhand way of shooting free throws. The shot has fallen out of favor and is even ridiculed despite its apparent effectiveness.

Trick shots are a way of making a very difficult or uncommon shot to either demonstrate skill or win a game like HORSE. These shots are usually performed with tactics that would not be legal in a regular game of basketball. This could mean shots from out of bounds or bouncing the ball off of other surfaces.

An alley-oop is a pass that is caught by another player while they are in the air approaching the basket. This spectacular pass can be a showstopper during a game.

Basketball is a many-faceted game with a myriad of options for scoring the basketball. Now that you have a good list of all the types of shots, you can watch and enjoy basketball to the fullest extent.

The game is about allowing athletes to perform feats that regular people just aren’t capable of. The combination of dribbling, coordination, shooting, and pure speed makes athletes that play basketball the best in the world.